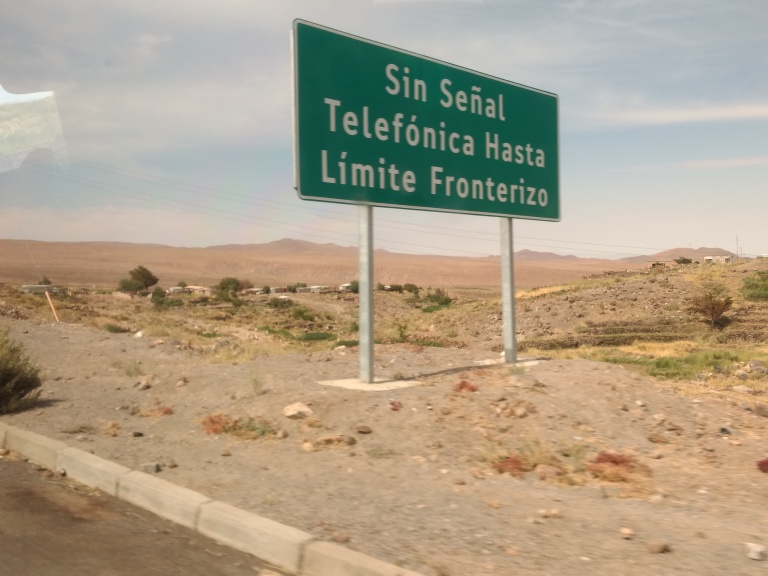 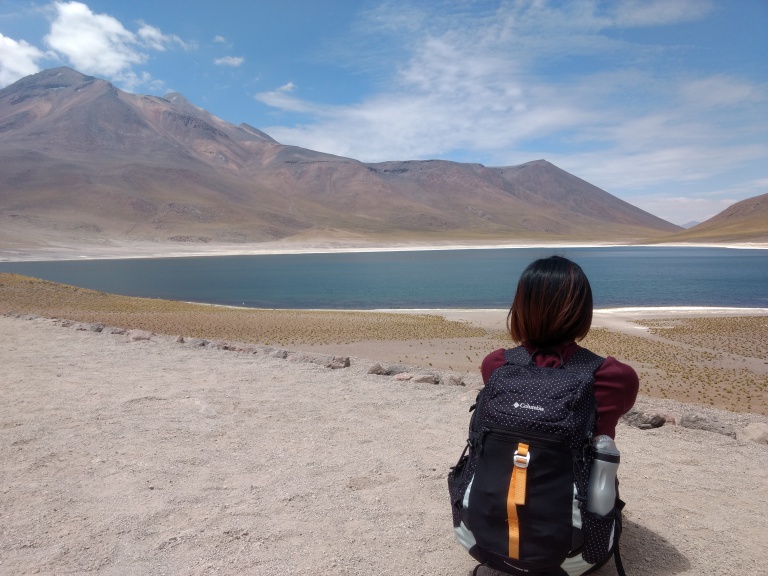 There are many fun tours to visit the surroundings and it’s possible to book everything there, because there are many travel agencies in San Pedro’s small city centre. My suggestion is to book everything at the same agency, so you can get discounts for booking many tours at the same time. The most common places to visit are: Lagunas Antiplánicas, Valle de la Luna, Piedras Rojas, Geyser Tatio, Laguna Cejar, Salar de Tara, trip to Uyuni 3-4 days and Astronomic Tour. I’m going to write a little about the tours I joined. The picture below shows the prices and information of a travel agency, from January 2018. 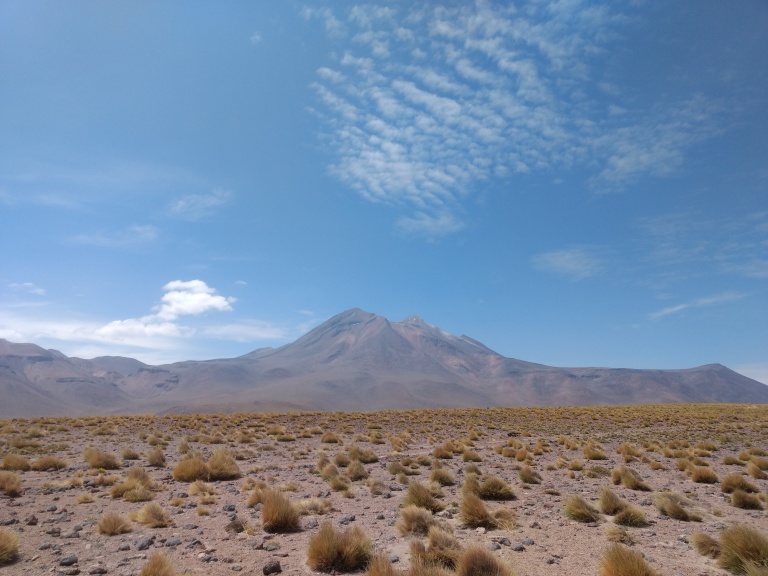 One of the most popular tours, it starts early in the morning and ends on the evening, so you need to be prepared and bring many layers of clothes (it gets hot and cold), comfortable snickers, water and snacks. The altitude gets higher than 4.000 meters above sea level, so even if you are excited, it’s better to avoid running around, to drink a lot of water and to breathe well, in order not to feel sick.

First we have a delicious breakfast, then we visit many beautiful lagoons. To enter the parks, we need to pay with Chilean pesos, so be sure to bring some spare money. At the National Reserve “Los Flamencos”, we can see many flamingos in their natural habitat. It’s important to follow the rules and not scream, not throw things at the flamingos (yes, some tourists throw stones in the direction of the flamingos to make them fly and then they can take a nice picture…), and of course, not throw garbage and smoke in the area. I wrote this here because many tourists do “silly” things and the local people don’t like that, some places have even closed to tourists.

This tour starts usually on the afternoon, because we can swim in the lagoon where our bodies float. The salt concentration is so high that it’s not possible to sink (I tried to, but I couldn’t sink haha). But you cannot swim at Laguna Cejar, only at Laguna Piedra, which is the other lagoon. The name of the tour is Laguna Cejar, but you can only look at the view and take pictures. You should bring swimwear and a towel, but also do not forget to bring warm clothes, it’s quite cold in the evening. If you have any wound be careful, the salt hurts. It’s also important not to put your face in the water.

Valle de la Luna is another noce place to visit, where we can have a sense of the desert immensity. It means Moon Valley in English, and it was named because of the surface of the place, which looks like the moon’s surface. I had booked a tour at an agency, but I met some people at the hostel and they were going to Valle de la Luna by bicycle, so I cancelled the tour and joined them. It was awesome, I had never thought that someday I would go cycling in the middle of the desert. It was quite tiring, but nothing too hard, we cycled for about 30 km including the return. The sunset at Valle de la Luna is also great, it’s worth visiting.

This Uyuni trip is awesome, I did it from Uyuni to San Pedro de Atacama and wrote about it on my last post (read it here). So those who plan on keep travelling to Bolivia can use this tour, but it’s possible to come back to San Pedro as well. But the trip takes 3-4 days, so be careful not to miss any flight.

This was the tour I most wanted to do. I heard that the night sky in Atacama is reaaaally beautiful. But unfortunately, the weather was bad. It’s rain season in January and February, and around full moon the sky is too bright to see anything. I knew about the risks, but I really thought that the weather could clear so I could see the desert sky full of stars. Someday I want to go back and do this tour, so I have to remember that January and February aren’t good months to visit. This tour really depends on the weather. I even hear a story of a girl who went there on the best season, stayed for the whole week and couldn’t see the stars because of the bad weather. This astronomic tour is offered in many agencies, but as I researched, SPACE (San Pedro de Atacama Celestial Explorations) is one of the best evaluated places to do the tour.

In San Pedro there are many other attractions too. The small city centre is quite exciting at night, with many restaurants and bars. But those who don’t want to spend much money can eat at places a bit distant from the centre (picture below).

I also visited the Meteorite Museum (Museo del Meteorito), close to city centre. It’s quite interesting for those who want to know more about the universe. I felt like learning more about it too. 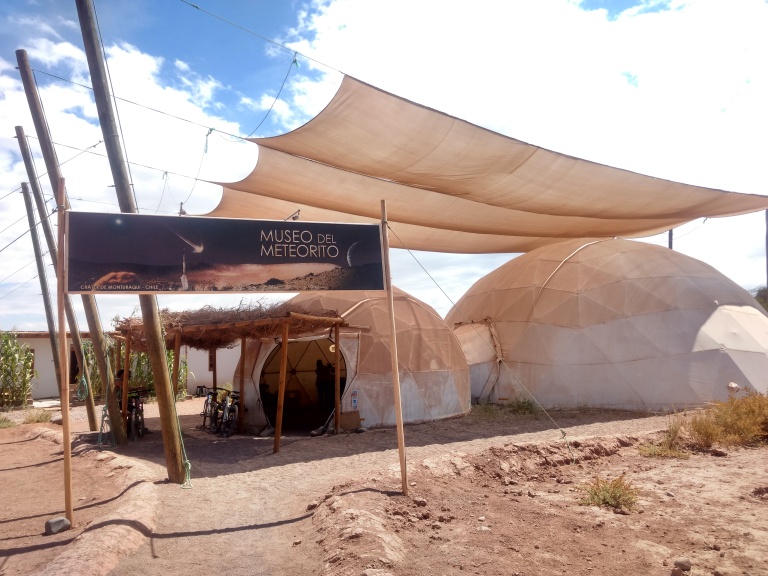 I stayed at Chill Hostel, a bit far from the centre (about 15 minutes by walk), but a very comfortable place, with a big space to sit and talk to other people. I met many nice people there, most of them were travelling alone as well. 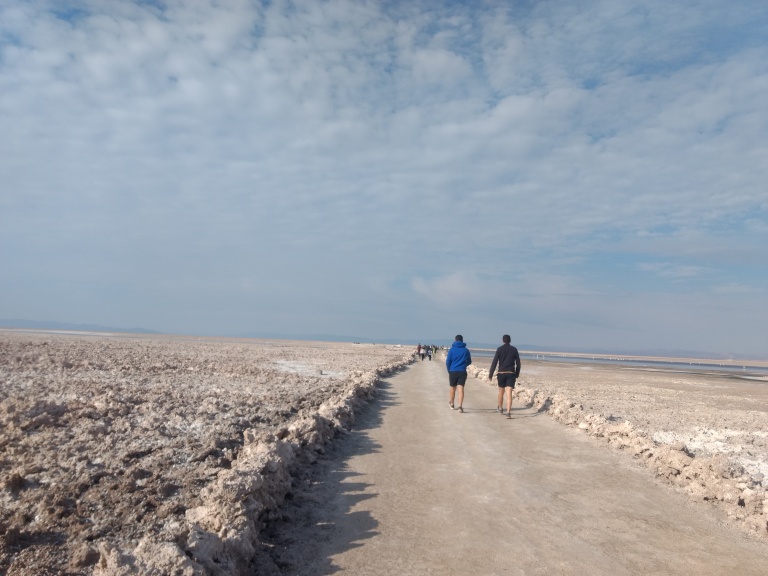 After San Pedro de Atacama I went to Santiago, and later, to Easter Island. To my surprise, there was an astronomic tour in Easter Island as well. I had never seen a sky with so many stars in my life. I was disappointed for not being able to see the night sky in Atacama, so my trip to Easter Island got even better.  I’m going to write more on the next posts.

My TOP 10 of this backpack trip: TOP 10 – PLACES/EXPERIENCES OF MY LATIN AMERICA BACKPACK TRIP

How much I spent in this backpack trip: LATIN AMERICA BACKPACK TRIP! ～SUMMARY～

If you have questions, advice, etc., please let me know

You can also email me: backpackandme1@gmail.com

This is a text widget. The Text Widget allows you to add text or HTML to your sidebar. You can use a text widget to display text, links, images, HTML, or a combination of these. Edit them in the Widget section of the Customizer.